The power of choosing to forgive

The enemy uses hurting people in this world to hurt you which can cause us to be bitter and angry in our lives.  It is a choice.  When you recognize that a person says or does something based out of the pain in their lives, it is easier to give them the same grace that the Lord gives us each day when we make mistakes.  When we choose to remain bitter and angry at those who have done things to hurt us, then we cannot be forgiven by the Lord for similar pain that we cause others.  Matthew 6:14-15 says “14 For if you forgive men their trespasses, your heavenly Father will also forgive you. 15 But if you do not forgive men their trespasses, neither will your Father forgive your trespasses.”

When you choose to forgive someone for a multitude of sins against you, you do not  exonerate them for what they did, but you free yourself up to be able to be freed from the anger, bitterness and hatred which can cause you to be sick or in emotional pain.  I know what it is like to love someone like Christ loved the church, yet to be lied about horribly after covering their emotional, physical and verbal abuse for six years.  I had to choose to forgive them for all the things they did instead of choosing to let it eat me up.  I had to see them like Christ saw them, as a hurting little child who never received unconditional love when they grew up.  When I could see them as the Lord saw them, I could give them grace thousands of times during the ordeal.  It was an extreme case of love, but now I can love so many others around the world and help others see that it is not the person, but rather the pain that is inside of their hearts that causes them to hurt others deeply. 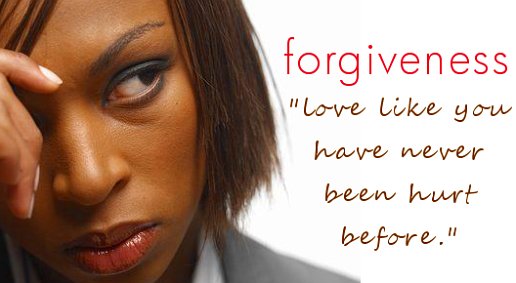 When you experience betrayal, lying and abuse for Christ’s sake, you ultimately can become more like Christ through the process.  But you must choose to forgive.  If you do not forgive, then you can literally make yourself sick and die.  I know of a woman whose husband was horrible to her in every way.  She was dying of pneumonia and her daughter visited her in the hospital.  Her daughter was abused by her husband and was angry with her mother for not divorcing him sooner.  The woman spoke to me about her husband who had died years before “I hope he burns in hell.”  She had multiple diseases and pain in her body so I talked to her about forgiveness.  She said she would never forgive him for what he did to her.

Over the next 3 weeks I was able to minister to her often as she was in a couple of different hospitals recovering from not only pneumonia but another issue.  During the last week I was able to get her to finally speak the words ” I choose to forgive my husband from all the horrible things he did to me.”  I cried.  I was so proud of this 90 year old woman because she finally was able to verbally speak and mean it in her heart, that she forgave her former husband for some extreme abuse that he did to her and her daughters.  It was truly a  miraculous moment for her personally.

When we can finally let go of what a person did to hurt us, it frees us up to receive health and healing in our bodies as the enemy has no case against us before the brethren.  The Lord is  able to come in and heal as the bitterness and offenses are no longer causing the pain inside.  Then we become more like Christ as he was without sin and died on the cross in a most horrible way.  When we can choose to forgive people for all that they did to hurt us, we are free to love no matter what.  I will never take an offense no matter what someone does against me.  But it is a choice that I have learned through a process to appropriate.  Christ calls us to never take an offense.  Proverbs 19:11 states “Good sense makes one slow to anger, and it is his glory to overlook an offense.”  Proverbs 18:19 “A brother offended is more unyielding than a strong city, and quarreling is like the bars of a castle.”  James 3:16 “For where jealousy and selfish ambition exist, there will be disorder and every vile practice.”

So choose to love others like Christ, quick to forgive, bearing all things and never allowing the enemy to have a case against you with the Lord.  It is freeing to you and life giving.  Walk every day never taking an offense against anyone and you will feel the love of  Christ come through you to others.  You will win the battle of the enemy trying to get you to take his bait of offense.  You will be restored to freedom.

4 Replies to “The power of choosing to forgive”