Over the past few years I have ministered to thousands of people around the world, of which about 85% have been women.   Women who have grown up with deep father wounds who have developed the Jezebel spirit causing them to control, manipulate, deceive and destroy their marriages and taint ministries.  While it is my conclusion that more women reach out for counsel and help than men, it has also been my observation that when i do have a man who reaches out to me who is operating under the Jezebel spirit, that their wives often times are dealing with sickness in their bodies, and some sometimes even die in their 40’s and 50’s.  Why is that?

When men operate in the Jezebel spirit, they (like women) are very controlling and manipulative with their words.  Women are meant to be cherished, loved and treasured by men who were created to be their protectors and knights in shining armor.  When a man verbally tears them down, berates them, every day for months and years, it takes a severe toll on the health of their wives.  Many have kept it a secret for years and sometimes their entire marriages over decades.  Ultimately their immune systems are on overload and they simply cannot survive anymore. 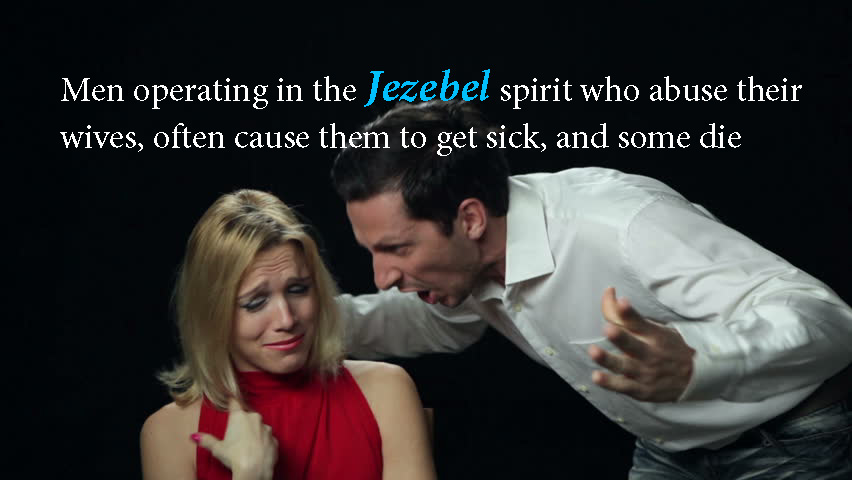 I know of many cases where women who were married to Jezebel men have  developed cancer and died in their 40’s or early 50’s.  Then the men, who appear to be loving and debonair, charismatic and women draw to them, get remarried to another woman.  Then soon after they are married, their new wife begins to get sick as she cannot take the behind the scenes verbal abuse and her body starts to shut down.  Some women have developed diseases where they can only eat certain foods, are exhausted and have other infirmities that they can not get healed from.

So what should a woman do when married to a man who is extremely controlling and manipulative?  Many times she goes to a counselor or pastor for help.  Most pastors and counselors are not trained to spot people who operate in the Jezebel spirit and the person who has Jezebel is a master at twisting the truth, lying, and blaming their spouse for things instead of being honest.  Thus counseling does not work with them as they will tell the counselor what they want to hear, then go home and continue the domination.  Only if the person realizes that they have Jezebel and then decides to command it to go will they ever change.  So what is a wife to do if their husband refuses to get rid of Jezebel once confronted?  They must separate for their own health in order to live in peace and stop the constant assaults.

Once separated they need to have their husbands address their situation with someone who has helped others to get freed from the Jezebel and Leviathan spirits.  Leviathan causes people to behave very pridefully and twists the truth, shifting the blame to their spouse or others that they have relationship  with. If they don’t get away from their husband, their bodies will continue to shut down and they could ultimately die prematurely.

If their husbands refuse to seek help from someone who has an anointing for delivering people from Jezebel, then they have to make a decision to stay married or not.  I am never an advocate of getting a divorce, but if a person is not willing to admit to their abuse and meet with a person who deals with deliverance from Jezebel, then you must decide if it is worth dying to live with them.  It is a very tough situation.  I know personally.  I had to separate from a wife who was extremely controlling, manipulative and deceptive and tried to stop me from helping people in ministry.  I reluctantly chose to separate after the Lord told me to.  But she was not honest in the one counseling session we went to and the pastor who counseled us was oblivious to the Jezebel spirit. After she lied about all the abuse she did to me,  she chose to divorce me because she could no longer control me.  It was her 4th divorce. Ultimately the Lord then brought me thousands of people around the world and they got freed from the Jezebel and Leviathan spirits and saved their marriages and ministries. So it was worth it in the end, like the Lord told me when He asked me to suffer in silence without telling anyone for 6 years until then releasing me and having me separate to be restored to freedom.

It has also been my observance that when a person is married to someone with Jezebel, that they are pushed to the brink of their sanity.  And many cannot stand it and rise up on occasion to defend themselves. They are provoked and provoked, over and over again, and can no longer take it.  Depending on the level of patience in the person who is the victim of the abuse, that person may be so provoked that they retaliate out of trying to just stop the extreme abuse.  They become someone that they aren’t for a brief time during the verbal barrage.

Jezebel affects more women than men due to their hearts being hurt more easily by father wounds, but when men are hurt by fathers who were either absent or extremely abusive, then the women who marry them are put in danger from the constant verbal and emotional abuse that they endure behind closed doors.  It is definitely the main reason for strife in marriage and the number one reason for divorce between couples.  One spouse is extremely controlling over the other.  One spouse has the Jezebel spirit and the other has the Ahab spirit.  When both get set free from those spirits, they can finally live in peace and have no strife.  They can become who they really are in Christ.  Loving, pure, gentle and sweet.  Mighty men and women of valor.  They can finally become who they were created by God to be.  Being restored to freedom is a beautiful thing.