Freemasons Usher in the Leviathan Curse to Their Families

So many people around the world are afflicted by the Leviathan spirit which wraps around a person’s spine and twists it, causing scoliosis, back pain, neck tightness, insomnia, becoming sleepy when reading or listening to the Word.  In some cases it even causes a person to receive Fibromyalgia and cancer.  My own grandfather was in it and I had no idea until years after he passed away. I had scoliosis and had to stop playing basketball in 7th grade. I suffered from headaches and had to go to a chiropractor on a regular basis.  So how does one get the Leviathan spirit?  You can receive it through significant emotional wounds from your father (or mother).  But you can also receive it if you had a father, grandfather or great-grandfather that was involved in the Freemasons due to a curse that comes down through the blood line because of things done in secret. 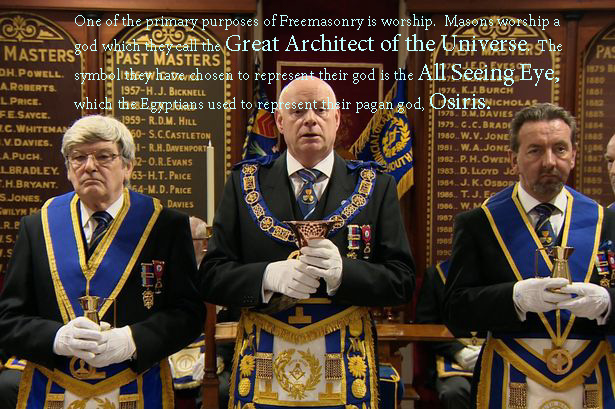 The Leviathan spirit can afflict generations within the same family, especially if the father, grandfathers, great grandfathers or earlier ancestry on either the mother or father’s side was involved in the Blue Lodge, Freemasons, Scottish Rite or York Rite, and Shriners.   Members of those organizations pledge secret oaths to Allah and against Christianity. This dates back to the early 1700’s in London, England and if members ever shared what went on in their meetings they pledge that a knife be poked in their eyes. Historically Freemasons were known for their secrecy and a way to obtain more business contacts and thus become more financially successful.  Many policemen, government, banking and other business related men looking for connections were common members.  Those that are members today say to people outside of the organization that things are different than they used to be in the past but are they really?

Over the years, some people have claimed that Freemasons worship Lucifer, or Satan.  The truth of the matter is that the name Lucifer is not found in the rituals of the Blue Lodge, or the York Rite.  It is not apparent that Lucifer is mentioned by name in the Scottish Rite degrees, either.  However, one of the “Sacred Words” in the 17th Degree of the Scottish Rite is “Abaddon,” the angel of the bottomless pit, mentioned in Revelation 9:11 NKJV “And they had as king over them the angel of the bottomless pit, whose name in Hebrew is Abaddon, but in Greek he has the name Apollyon.”

Worship does occur in Masonic Lodges.  One of the primary purposes of Freemasonry is worship.  Masons worship a god which they call the Great Architect of the Universe.  The symbol they have chosen to represent their god is the All Seeing Eye, which the Egyptians used to represent their pagan god, Osiris.   Many Masons are well aware of the pagan connection.  It is clearly stated in a number of Masonic Monitors.

Since Freemasonry teaches a false plan of salvation, Masons are not following in the teachings of Jesus Christ.  2 John 1:9 NKJV says “Whoever transgresses and does not abide in the doctrine of Christ does not have God.  He who abides in the doctrine of Christ has both the Father and the Son.” So this allows us to know that since they are not following in the teachings of Jesus, they do not know God.  Freemasonry is classic paganism.  1 Corinthians 10:20-21 NKJV states “20 Rather, that the things which the Gentiles sacrifice they sacrifice to demons and not to God, and I do not want you to have fellowship with demons. 21 You cannot drink the cup of the Lord and the cup of demons; you cannot partake of the Lord’s Table and of the table of demons.”

This confirms that the sacrifices of pagans are offered to demons, rather than God.  Although we can say with certainty that the god of Freemasonry is a demon, we do not know specifically which demon Masons worship in lodge.  We simply know that they refer to their demon as the Great Architect of the Universe, or GAOTU.  All demons are under the leadership of Satan.  Therefore, Freemasons cannot avoid worshiping Satan by proxy.  Very few of them realize the facts in this aspect of Masonic worship.  A great many Masons, even some who do not claim to be Christians, would leave the lodge immediately if the names of Satan, or Lucifer, were substituted for the GAOTU in Masonic prayers.  Satan would not allow that to occur, because the more effective lie is the one which is closer to the truth, without being true.

If an ancestor has ever been a Grandmaster of a lodge, or initiated into high level Witchcraft, the Leviathan spirit will increase into what is known as The Leviathan Curse. Persistent feelings of anxiety and neck or back pain are signs that one may be under The Leviathan Curse. You can, however, carry the Leviathan Spirit and not the curse.  One woman was dying from 4th stage lung cancer and had a dream.  In the dream was Jesus and her grandfather.  Jesus told her that the reason she had cancer was because of her grandfather.

Leviathan is depicted as having seven heads which are Pride, A Critical Spirit, Confusion (Stupor), Impatience, A Lying tongue (Deception) and Contention (Discord, Hate, Murder). These are reflected in Proverbs 6:16-19: NKJV “These six things the Lord hates, Yes, seven are an abomination to Him: A proud look, A lying tongue, Hands that shed innocent blood, A heart that devises wicked plans, Feet that are swift in running to evil, A false witness who speaks lies, And one who sows discord among brethren.”

Below is Job 41 which describes the Leviathan spirit:

1 “Can you draw out Leviathan with a hook,

Or snare his tongue with a line which you lower?

2  Can you put a reed through his nose,

Or pierce his jaw with a hook?

3 Will he make many supplications to you?

Will he speak softly to you?

4 Will he make a covenant with you?

Will you take him as a servant forever?

5 Will you play with him as with a bird,

Or will you leash him for your maidens?

6 Will your companions make a banquet of him?

Will they apportion him among the merchants?

7 Can you fill his skin with harpoons,

Or his head with fishing spears?

Never do it again!

9 Indeed, any hope of overcoming him is false;

Shall one not be overwhelmed at the sight of him?

10 No one is so fierce that he would dare stir him up.

Who then is able to stand against Me?

11 Who has preceded Me, that I should pay him?

Everything under heaven is Mine.

His mighty power, or his graceful proportions.

13 Who can remove his outer coat?

Who can approach him with a double bridle?

14 Who can open the doors of his face,

With his terrible teeth all around?

15 His rows of scales are his pride,

Shut up tightly as with a seal;

16 One is so near another

That no air can come between them;

17 They are joined one to another,

They stick together and cannot be parted.

18 His sneezings flash forth light,

And his eyes are like the eyelids of the morning.

19 Out of his mouth go burning lights;

Sparks of fire shoot out.

20 Smoke goes out of his nostrils,

As from a boiling pot and burning rushes.

And a flame goes out of his mouth.

22 Strength dwells in his neck,

And sorrow dances before him.

23 The folds of his flesh are joined together;

They are firm on him and cannot be moved.

Even as hard as the lower millstone.

25 When he raises himself up, the mighty are afraid;

Because of his crashings they are beside themselves.

26 Though the sword reaches him, it cannot avail;

Nor does spear, dart, or javelin.

27 He regards iron as straw,

And bronze as rotten wood.

28 The arrow cannot make him flee;

29 Darts are regarded as straw;

He laughs at the threat of javelins.

He spreads pointed marks in the mire.

He makes the sea like a pot of ointment.

32 He leaves a shining wake behind him;

One would think the deep had white hair.

Which is made without fear.

34 He beholds every high thing;

He is king over all the children of pride.