So what happens to a child raised by a father (or mother) that reject them and treat them harshly?  The child grows up feeling unloved and possibly afraid of their father and most men (and if the mother treated them without love then they could have additional fear and lack of trust of women as well).  Because the child does not feel loved, and is in fear of their father, they are not free to share their hopes, dreams or true concerns in an honest way with their parent(s). Their hearts have been broken, crushed and stepped on and they feel no sense of security or protection. 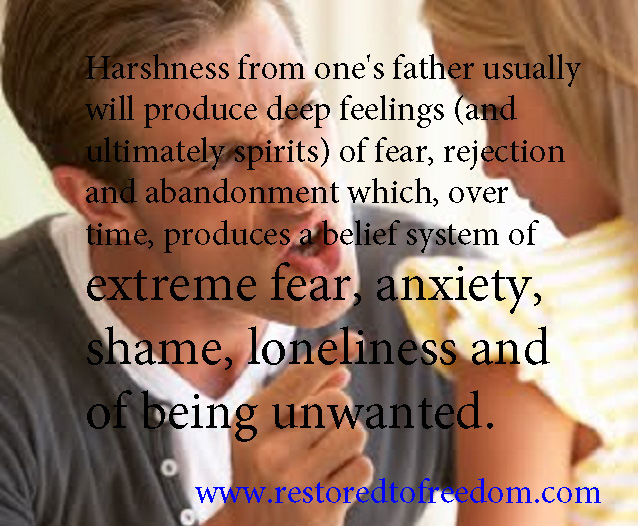 Consequently, the child develops feelings of rejection that can affect them the rest of their lives.  If anyone says anything to them that they do not agree with, they could be triggered to put up a wall of defense and be offended at the drop of a hat. They will offend others with their negative behaviors continuously in order to protect their own selfish interests so they can survive and thrive at the expense of those around them because they trust no one.  They look to themselves first as they feel they cannot depend on anyone else in the world to protect them, including God who their earthly father represented.

This usually will produce deep feelings (and ultimately spirits) of fear, rejection and abandonment which, over time, produces a belief system of extreme fear, anxiety, shame, loneliness and of being unwanted.  Ironically this in turn can develop into behaviors of wanting to please people as much as possible and to be a perfectionist in order to earn just a little approval and the kind of love their father never gave them.

If they are just “good enough” their father or mother might like them a little bit and tell them they love them – even though it is a conditional love that could be pulled at any point.  Some parents have been known to “disown” their children because they did not do exactly what they wanted them to do.  Some parents write a child into and out of their will in order to control and manipulate them.  Because mistakes triggered their father’s or mother’s displeasure or anger, the child will try very hard to be “good” and act perfectly according to their parents’ desires (which their fathers’ and / or mothers’ wishes will normally be demanding, unloving and not healthy) in hopes of receiving just a little approval or some token of love from the parent.

When the child grows up with the concept that their earthly father (who formed their view of all men, husbands and God) does not want or love them unconditionally, then they are left to protect themselves and always feel alone and in fear, never able to truly trust God to meet their needs and provide security for them.  They can never trust their husband even if the husband loved them like Christ. Due to viewing their world through a cloudy lens of fear they are constantly having to control and manipulate the spouse in extreme ways, pushing them further and further away.

This person will feel very insecure, inferior and intimidated and possibly afraid of their father thus developing a view that fathers (and all men in general) only disappoint or hurt them (emotionally and physically).  They believe that they have to control all their circumstances at an extreme level to survive because they have no trust in anyone except themselves, and will do everything possible to keep others from seeing who they really are inside. Yet their spouse and children will see and experience all the negative behaviors over and over and over again.  Because they do not trust anyone else they usually will not delegate anything significant to anyone because they feel the job or task will not be done correctly.

If they do delegate a task to family, the family member will be constantly corrected and it will never be right in their eyes so they will receive verbal harassment. They believe others will let them down and so they must complete the job themselves or it will not get done right.  They also have to hide their mistakes because they might receive a word of correction from their spouse or a manager at work which they are not able to bear to receive any practical instructions due to the constant correction and criticism from their own father and possibly mother which brings up reminders of failure and condemnation to them.

So they develop the need to try and cover up their negative behaviors which eventually leads to lying because they cannot be honest with having any faults or making mistakes.  They believe “If people do not learn that I am doing these negative behaviors then I will not have to receive correction or criticism and can continue to get away with it and no one will find out the truth of who I really am.”  Unfortunately they are always looking over their shoulder as they must be sure no one finds out about any negative behavior as it would be considered wrong and make them feel bad about themselves again.

When people learn who they really are behind closed doors, they will feel horrible about themselves and they cannot take any more criticism since they have endured a lifetime of it from their father and/or mother.  Ultimately, they may end up concealing things and of course not wanting their spouse to know what they are up to because they would not be able to get away with some of their behavior if their spouse actually knew all that they were doing.  They continue to look over their shoulder and need to make up one lie to cover up another.

It is truly a tormented life of fear, deceit, manipulation and control as the web of lies is spun every day, month, year and possibly a lifetime.  So a woman may, for example, lie to their husband about things that they are doing knowing they would not be pleased. They could also feel the need to attack anyone who is in authority over them to try to take control as they do not trust anyone but themselves.  They want to show them “I am the boss” before those people disappoint or hurt them again (including their earthly father, husband, their male manager at work, possibly even their pastor, and God the Father).